If you come by plane:

International airports are only in Budapest, so you will arrive to the capital from abroad. There are two airports beside each other close to the border of Budapest. The old terminal is the Liszt Ferenc Repülőtér 1, and it is used by only a few airliners, they are mainly charter flights. The new terminals are the Liszt Ferenc Repülőtér 2A and 2B. The blue public transport busses number 100E and 200E start from Ferihegy 2A and 2B airport terminals on the arrival level. The bus number 100E is a direct bus to the centre of Budapest, the travelling time is about 40 minutes. You can use it with special ticket, its price is 900 HUF, you can buy it at the bus stop from ticked machines. The bus number 200E goes to the terminal of the underground line number 3 (Metro line 3 or M3) at Kőbánya-Kispest railway station, and has a station at the old terminal. The travelling time with this bus is 20 minutes. You can travel farther with M3 to the downtown (it is a further 15 minutes long travel). Three underground lines of Budapest cross each other at the Deák tér (Deák Square), this is the geometric centre of the capital. Here is the terminus of the bus number 100E, and the underground line number M3 has a stop on the square.

Budapest - Ferihegy 2A and 2B Airport Terminals on the Google Earth

The busses start really often, in every 10-15 minutes. There is another possibility, you can use the Airport minibuses. One travel to the downtown is 2.300 HUF/person and the travelling time is about 30 minutes. This service has information desks on both airports, you can inform and book the travel there. Of course the fastest transfer is the taxi. The Főtaxi Company has taxi stations at every terminal. A travel to the centre of Budapest is about 4000-5000 HUF – it depends on the distance and the travelling time.

If you come by train:

Budapest is the centre of the Hungarian railway lines and the international trains have a stop here. There are three main railway stations almost in the centre of the capital, and the international trains use all of them. Their names are Keleti pályaudvar (Eastern Railway station), Nyugati pályaudvar (Western Railway Station) and Déli pályaudvar (Southern Railway Station). Their names don't refer to their position in Budapest and don't refer to the direction of the arriving and leaving trains. Why have got they these names? I don't know! But all the three railway stations have a good accessibility with the M2 and M3 Metro lines.

The public transport is really cheap and good in Hungary, if you will travel to the countryside from the capital, your trains will depart from the above mentioned railway stations. You will find a table about the good entry and exit points of the National Blue Trail below, I write exactly there, which station is the departure point of trains going in different directions.

About the tickets of the public transport of Budapest

There are single tickets of the public transport company in Budapest, which are valid on the trams, busses, underground (Metros) and HÉV (suburban railway from Budapest to the neighbour villages) until the boundary of Budapest. You can buy them on the airports and anywhere at the newspaper or tobacco shops, or at the ticket offices of the Budapesti Közlekedési Vállalat (BKV) - in English: Public Transport Company of Budapest. Generally you can find the offices at the railway stations, at the bigger Metro stations and at the big public transport junctions.

Budapest - Articulated bus in front of the Museum of Fine Arts. Photo: BKV-figyelő

You have to validate a new ticket at every travel! You can't change and travel farther with one ticket! You will find many ticket validating devices on the handrails of busses and trams. But there are many busses, mainly in the outskirt of Budapest, where you can use only the first door to get on. In this case you have to show the new ticket to the driver, and validate it with that device, which is mounted at the first door.
The situation is a little bit different at the underground lines! There are no ticket validating devices on the trains, you must validate the ticket when you enter the area of the underground. This ticket will be valid in the next 80 minutes, or until you leave the area of the underground! It means literally, you can change among the underground lines many times.
Important: If you travel in the town with the public transport vehicles, you will meet often with the inspectors of the public transport company! Don't pretend, you don't understand them, because they will call the police (or a policeman is with them), and they will escort you to the police station. The travel conditions are in Hungarian/English/German versions on the windows of the vehicles!

If you would like to spend more days in Budapest to get to know the sights of the capital, I recommend you to buy some travel card. You can use them without any limitation on every bus, tram, Metro and HÉV line of the BKV until the boundary of Budapest. They are valid even on the cog railway among the hills of Buda! You can buy them only at the ticket offices of the BKV.

The prices of the tickets and travel cards

You can find further information about the tickets and the fees on this website: http://www.bkk.hu/en/tickets-and-passes/prices/ . I think, the single tickets are a little bit expensive, but it is worth buying some travel card, if you will spend longer time in Budapest. The public transport is very good in Budapest, you can get to everywhere with the public transport vehicles!

Here is a map about the public transport lines of the whole Budapest. It shows always the momentary state of the lines. It is downloadable in PDF format from the website of the Public Transport Company of Budapest:
http://www.bkk.hu/apps/docs/terkep/budapest.pdf

About the travel on the countryside 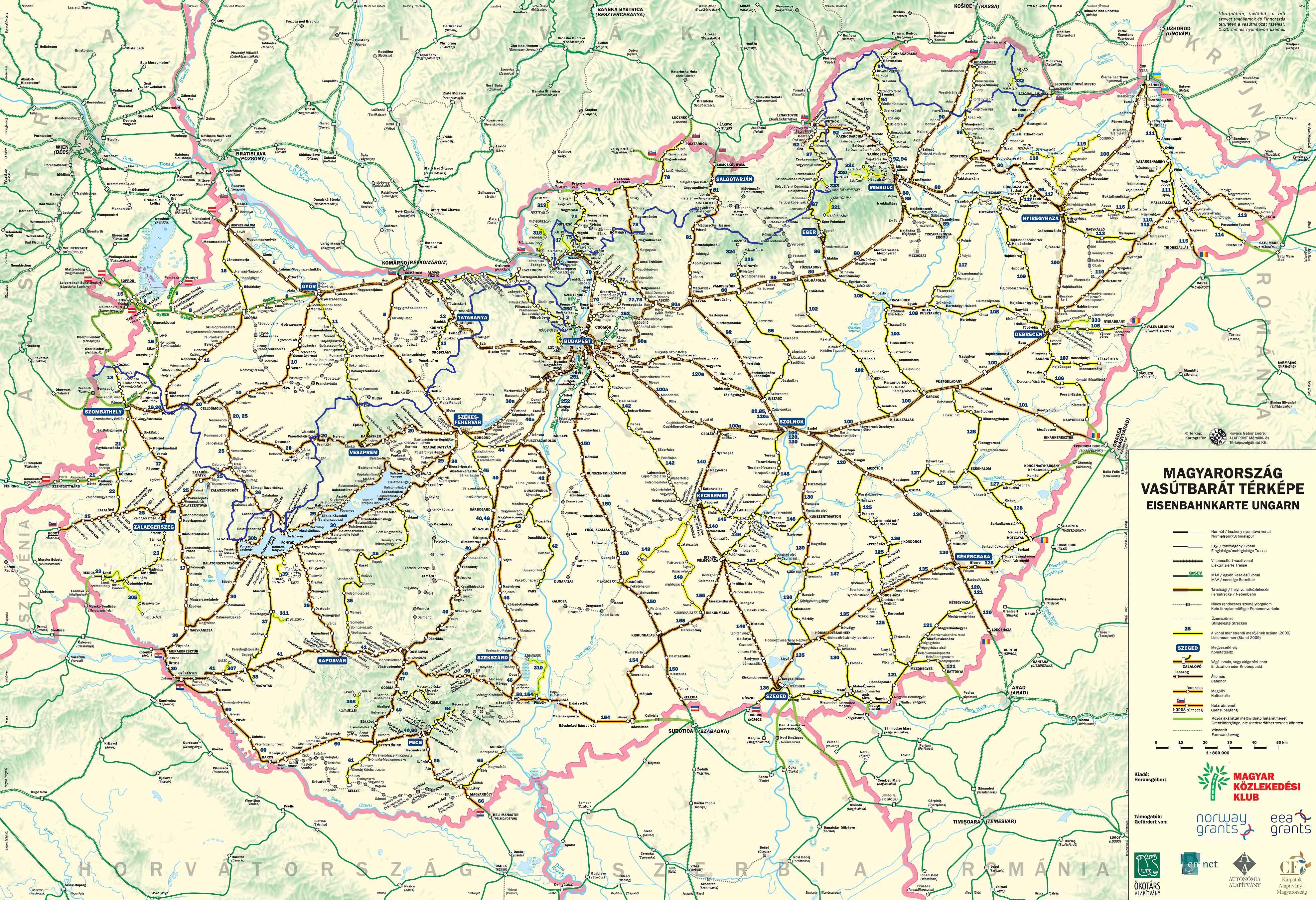 THE HUNGARIAN RAILWAY LINES AND THE ROUTE OF THE NATIONAL BLUE TRAIL
If you click onto the map, it will open in bigger size.

Budapest is the centre of the Hungarian railway lines and they start from the earlier mentioned three main railway stations. There is a very good timetable of the MÁV (Hungarian State Railways), its address is the following: http://elvira.mav-start.hu . This website has German and English version, as well.

You can reach many places of the Blue Trail by long distance coaches, as well. They start from Budapest and they have two main terminals. The name of the first is Budapest Népliget buszpályaudvar (Budapest, Népliget Bus Station), it is accessible by the Metro3 line, and the name of the second one is Budapest Stadion buszpályaudvar (Budapest Stadion Bus Station), you can reach it with the Metro 2. The coaches start towards the western part of Hungary (towards the Transdanubian region) from the Népliget Station and towards the eastern half of the country from the Stadion Station.

You can reach the timetable of the long distance coaches here:
https://menetrendek.hu/ Unfortunately it has only Hungarian version, but on one hand it is suitable to plan your travel only by busses (click on “Csak busz járatok”), on the other hand you can start a combined search with bus and train together (Busz, vonat és hajó járatok).

The prices of the coaches and trains are the same in same distances. I tell you only some prices as examples (December 2019):

You can find the whole chart of prices here: http://www.volan.hu/dijszab/jegyar.pdf . These prices are valid from January 2016 on the second class of the railway, on the long distance coaches and inter-settlement busses. These prices don't contain the additional price of the seat reservation and the first class of the trains.